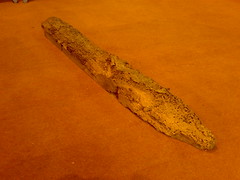 I wasn’t going to blog about Church again today, but I thought I’d share this picture which I took after the 11am service.

At the end of the Parish Notices, Rev Richard reminded everyone that if all goes according to plan, we won’t be in the Church for Easter 2008, as by that point we will be about half-way through the conservation work which is due to begin immediately following Christmas this coming winter. Thanks to our resident colony of bats, the work has to be undertaken from January, at the time when the bats are least active.

In preparation for the work, there has been a team in the Church over the past couple of weeks who has been taking up all the floorboards to take a look at what is underneath, in order to get an impression of what work needs to be done. Whilst the problems with much of the woodwork is visible, nobody has seen under the floor for many decades – shown perhaps by the collection of lost property, including a mobile phone and selection of pre-decimal coins that were found during the process.

However, what the team also did was do some temporary repairs to the worst of the floorboards and joists – the ones that were dangerous. The picture show here is one of the wood planks that was holding up the floor towards the back of the Church, and which was partially taking the weight of the organ, and certainly took the weight of the scaffolding that was used during the recent work on the organ. As the floor specialist said on seeing it, he was surprised somebody hasn’t fallen through. When the local paper published a news story under the heading â€œSave Our Church from Being Eaten By Wormsâ€? most people thought they were exaggerating, having seen the board this morning, it seems rather accurate…

Total wise, we’ve reached Â£300,000, with another Â£200,000 still to find to reach our Â£0.5 million target. Details of how to donate can be found here, with a secure online donation facility available here.

In terms of the main 11am service, it was good to actually sing in the Choir for Easter morning. We were well over capacity again at that service, with every seat filled. It was much the same at the 9:30am service too. Between all the services there have been over 400 people attending St James today.

2 thoughts on “Our Church Really is Being Eaten By Worms”