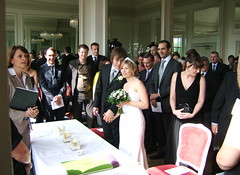 I had to wait a bit to blog this, just to make sure that Jo and Drew were happy for it to go forward, but I got an e-mail from Flickr yesterday saying that my picture had been selected to possibly go into the book and exhibition for 24 Hours of Flickr.

Since submissions are open until 21st May, it is still possible that the picture might not appear, but I’m really chuffed to have made it through to the final stages. Participants were only able to submit a single shot, and had to try and sum up the whole day, and I felt that this shot pretty well explained the way we spent 5th May 2007.

There is currently a discussion going on in the group itself amongst people who have received one of the selection e-mails. Certainly there seems to be a good mix, right across the spectrum of pictures you get on Flickr. For example there are some shots that are just fantastic pictures, like this shot of Chesil Beach by petervanallen. Alongside this (and I suspect my picture falls into this category) there are event shots, not necessarily great pictures, but important moments captured, so there are several graduation pictures, and other than mine several wedding shots too.

So maybe the picture will end up in a collage – not that I particularly mind, I’m just chuffed to have been picked!

One thought on “Picked for the Book”