So this last week has been pretty monumental. Apparently some bloke was elected president across the pond, but the big news is our baby Lucy was born on Tuesday.

As some of you may know, Beth was diagnosed with gestational diabetes part way through the pregnancy. Basically what this means is that thanks to the hormones produced during the pregnancy her system is less sensitive to insulin, so as with a normal diabetic she needed to supplement her insulin levels by injection. Another side effect is that the birth weight is generally larger, especially if the condition has not been diagnosed, plus there is an increased risk of the baby being still born. As a result, the hospital recommended that labour be induced at around thirty-eight weeks, rather than allowing the baby to go full term. 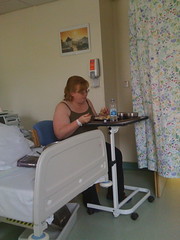 As a result, we were booked in and dutifully turned up at the delivery suite at the hospital at 8am on Monday morning, and were put in the largest of the delivery rooms with instructions that it would probably be a long wait.

It has to be said, in terms of business, the delivery suite was pretty quiet, by Monday afternoon were were the only people in there (although they made up for that over the next couple of days with every room filled), and with us there wasn’t much happening. Beth was treated with prostaglandin shortly after we arrived and not much happened. We walked numerous circuits around the hospital corridors, but the baby resolutely stayed put. So we read the paper, Beth did the crossword and generally sat around and tried to pass the time. As a result of the failure of the first go they tried again at 3pm, and again not really much happened – Beth had some mild contractions, but by about 6pm they decided to transfer her over to the part of the maternity ward reserved for mothers before birth and sent me home, with instructions to come back for 8am the next morning when they would have another go.

In actual fact I didn’t have to wait that long. Having had something to eat, and phoned around various people with updates I got a call from Beth. Having just got settled in the ward her waters had broken and she’d been rushed back to the delivery suite. As a result I jumped into the car and headed back to the hospital.

I got back just before 10pm to find Beth pretty zonked out from gas and air, and apparently things moving pretty quickly. The midwife thought it would still take a goodly amount of time, so at about midnight we had a visit from the anaesthetist who administered an epidural to allow Beth to get some rest, and they set up a bed in the corner of the room for me to sleep on whilst they monitored during the night.

The overnight monitoring found that Beth dilated pretty well up until the check at 4am. By 8am she was still dilated the same amount and the doctors were called in. The problem appeared to be that because of the positioning of the baby it was being pushed into Beth’s pelvis. They said that we could continue with normal labour if we wanted – but added that we could very well be in exactly the same position in a few hours time. The other option was an emergency c-section. Since Beth was pretty tired at this point we opted for the c-section, and went into theatre about 9:30am, with Lucy being born at 9:41am. 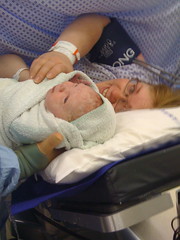 Not surprisingly, us as parents didn’t see much of what was going on. I was sat up by Beth’s head, along with the anaesthetist, and they set up a screen so that Beth and myself can’t see the operation in progress. It takes them all of about a minute to get to the baby (the start time of the operation was officially 9:40am, and you could hear Lucy crying before she was even taken out. After that Lucy got handed over to a paediatrician to check she was okay, whilst the surgeon removes the placenta and closes up the incision. After the paediatrician has done his initial checks Lucy was brought around for Beth to see, and all the rest of the checks, the weighing of the baby and dressing are all done where Beth can see, in part as a distraction from what is going on over on the other side of the screen.

From there we went through and spent a bit of time in the recovery bay along with a mixture of other patients from the other operating theatres, and from there we were taken straight through to the maternity ward. Beth and Lucy spent a couple of nights there, and came home yesterday. 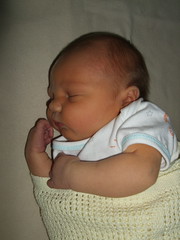 All in all we had a great experience with the hospital and the five midwives we went through during the over twenty-four hours we were going through the system. Perhaps the only complaint we’d have is the sauna like heat throughout the building. People may point at lots of other ways that the NHS is losing money, but if Frimley Park is typical, one major way is straight out of the window. In our room in the delivery suite the main radiator was going full pelt all day, with no way to turn it off, and as a result the staff keep both windows in the room permanently open to keep the temperature at something reasonable. It is the same story in the maternity ward where again they had windows open to keep the place at a reasonably constant temperature. Only the private rooms actually seem to have some ability to control the temperature, and there are some radiators around the place with valves, but not all.

Anyway, mother and baby are now home and doing well, and we’d like to thank everybody for all the good wishes and gifts – indeed the first piece of post addressed to Lucy was sitting on the step when we got home yesterday. We’ve had various people ask if we have things we particularly need, so there are a couple of wish lists going for Lucy. One is at Amazon, and is mainly toys and books, the other is at Mothercare and is generally more practical items, so if you’re stuck for something to get feel free to take a look at those. Once again, we’d like to thank everybody for all the good wishes, offers of help, and gifts, hopefully we’ll find time to get around to thanking everybody personally once things have settled down a bit around here! In the mean time, not surprisingly we have an ever growing collection of pictures of Lucy, which you can see over on our photo pages.