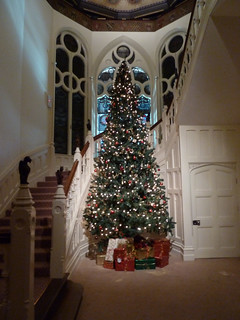 David Cameron is spending loads of money trying to gauge the happiness of the peoples of the UK.

Seriously, he doesn’t need to spend all this money, there is a simple way to gauge the mood of a nation – how early do the Christmas decorations go up…

After a drought that became one of the wettest summers in years, with the non-stop rain leading to floods, a recession whose predicted length gets longer every week (now predicted to last well past the next election), and now a sudden cold snap, this weekend the country seems to have taken a collective decision that we need some cheering up!

I’ve uploaded a few pictures of our family Christmas get together to Flickr, including quite a few pictures that will probably leave Lucy with a Christmas tree phobia for life… Unfortunately the sleeping bag is a little big for her now, and will be way too small come next year…

Also as a special treat for those amongst you who have only ever seen her asleep (at least one friend of Beth’s jokingly says that they doubt that Lucy really exists because she’s always asleep) a bit of movie footage of an awake and moving Lucy! 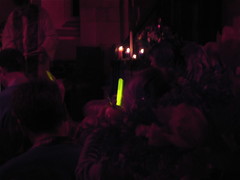 We’re in the middle of the busiest time at St James. Last night was the traditional Nine Lessons and Carols service, that had a record breaking 302 people attend – with people stood packed into the vestry, and stood in the North Aisle – apparently it got so hot in the building that the organ went out of tune… It certainly seems like we’re going to have to do the same as we do with the Christingle services, and run the whole thing twice next year in order to accommodate everybody who wants to attend.

Today we had the four Christingle services. We were on duty for the 2pm and 4pm services, with Beth acting as sidesperson and looking after the sound system, whilst I discovered a new calling as a doorman keeping track of who was coming in, and more importantly collecting unused tickets that people had got ‘just in case’ to allow the one or two people who turn up on the off chance an opportunity to get in. Thanks to the flu bug doing the rounds in the village there were quite a few returns, although at the 4pm, those were all used, and one family decided to come back for the 6pm service as there were no seats left at 4pm – so it looks like we’ll get somewhere between 600 and 800 people through the doors for those services alone – and we haven’t even got to Christmas itself.

The Midnight Communion is usually packed – so on the basis of the turnout last night we’re expecting to be jam packed – quite how we can expand capacity at that service I don’t know. We’re then back up for the 11am service tomorrow morning – although there is also an 8am and 9:30am service too. Certainly it’s looking like we may well have another record in terms of the number of people through the doors over the Christmas period.

We have a few pictures of the 4pm Christingle service up on my Flickr stream, although as usual with shots of this service the majority are restricted access because of all the children in the pictures.