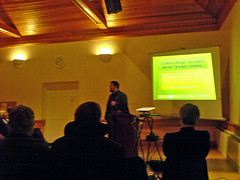 Tonight we had the last of our Lent Lecture series (next week is a play in the Church), Revd Professor Ian James, who in his day job is a professor of Meteorology at Reading University, but is also a non-stipendary priest (who started off his talk by reminding us that on his previous visit he took our Easter dawn service – ironically because the person who introduced him tonight, Revd John Edwards, who had done it the year before, said he wouldn’t do it again…) in Bracknell, and the Diocesan Environmental Advisor, speaking about ‘Christianity, Christians and the Environment’.

He started with a review of the evidence of climate change, starting with a graph of the levels of Carbon Dioxide in the atmosphere, and covering the topics of rising average temperatures, melting glaciers, the rising sea temperatures that caused the worst hurricane season this last year, and who the biggest polluters per head of population are – the USA by a large margin, closely followed by Russia, Canada and Japan. Surprisingly Europe comes quite a way down compared to the US, although he did say that the reason for the reduction is that Europe is exporting a lot of it’s pollution thanks to the reduction in manufacturing industry that is now relocating to places like China and India. The BBC News site has an extensive section showing similar evidence of changes, and discussing many of the points that Ian made.

He then moved on to looking at why we as Christians should be concerned about the environment. He started this section by recalling many years ago how he had given a similar presentation to a group of local clergy, and was most surprised a few weeks later to be sat in a congregation whilst one of those clergy preached about how Christians should be doing other things rather than waste their time on trivial irrelevancies such as the environment! He gave a number of arguments as to why the Church should be focused on the environment, including the creation story in Genesis, but also by focusing on the key message of love for ones neighbour. As he highlighted, ones neighbour is anyone in the world, and as our decisions and actions in the UK affect the climate in distant parts of the world, we are showing love, or lack of it for our neighbours in the third-world by our over-consumption of energy in the west that is leading to rising greenhouse gases, and a changing climate that is certainly going to impact on the poorest parts of the world first. Following on from his story about the Bracknell clergy, he showed how things have changed a lot now. For example our Bishop now drives an environmentally friendly car, and the Diocese has taken the decision to cut emissions in line with the Kyoto agreement, even if the UK as a whole is going to fail to meet the targets.

Following on from his talk we had a wide variety of questions. Most interesting from my point of view were his comments on the Electricity industry. Firstly he highlighted the ongoing campaigns against wind farms, often on the basis of the visual impact. Secondly he moved on to the topic of nuclear power. I have to say that having worked for SSE, my opinion on the nuclear option has changed. Lots of people will object to nuclear in principle, and suggest renewable sources such as wind, however with the ongoing opposition to such schemes, the chances of being able to generate enough through these sources is non-existent. Ian made an interesting point, that people often get small chances of a serious problem massively out of proportion. For example with nuclear energy there is a small risk of some sort of catastrophic accident, however to produce the levels of power required by the UK, the other options are gas or coal fired stations. Whilst there is less risk of a catastrophic accident, there is pretty well a hundred percent probability of continuing environmental damage, environmental damage that could lead to thousands, if no millions of deaths worldwide. His opinion is that if the world is to avoid any sort of unacceptably sudden and significant change in lifestyle, there is no way that it can be done without including nuclear power. He also briefly discussed small scale generation, highlighting the vast amounts of carbon dioxide produced by the production of solar panels, but suggesting a rooftop wind turbine as a viable option.

All in all it was a very informative talk, and certainly gave the parish a lot to think about. Hopefully as a result we can get the Church moved towards being more green sooner rather than later.