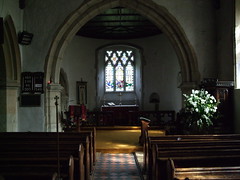 This weekend was the annual Heritage Open Days weekend when historic buildings across the country, sometimes buildings that rarely allow public access, open their doors to the public. Locally this was organised under the banner of the Wokingham Heritage Weekend, and as our contribution we opened the church to visitors and as we do in July, allowed people to climb the tower.

It has to be said that during the week, the weather wasn’t looking particularly promising, and whilst it didn’t rain yesterday, it was overcast for a lot of the day, however this afternoon was fantastic, not too hot, but a nice clear day, so people got great views from the top.

We were open between two o’clock and five o’clock and had a steady stream of people from opening, with it being busiest between three o’clock and four o’clock. Like all the events in the weekend we weren’t making any charge, however that didn’t mean that we didn’t have a prominent big sign asking for a donation to the conservation fund, and the majority of the visitors were happy to contribute, many gift aiding their contribution as well. We also laid on cream teas, which were also very popular – one husband who had hoped for a piece of the cake baked by his wife was sadly disappointed as by the end of the afternoon there was no food left at all! Hopefully we will have made a few hundred more towards the half a million pounds needed for our conservation work.

I took a few pictures of the afternoon, which can be seen in our photo galleries. The different time of year giving a lower sun allowed me to take some nice shots playing with sunlight – this shot of the inside of the building and this silhouette of the parapet being ones I thought came out well. 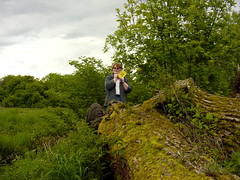 You know those moments when someone thinks they’re telling you about some really great secret, but you, and a load of other people already know? Various of us at St James had that experience this morning listening to Rev Richard’s sermon.

On his day off, he and Penny his wife had headed off to the Bramshill Plantation, a large area of Forestry Commission land just over the border into Hampshire on the other side of Eversley. They went walking off into the forest, Rev Richard armed with a map and compass, and managed to get them thoroughly lost.

Luckily for them, they met someone else walking through the forest, and asked him if he knew where they were, he pulled out a handheld GPS unit – something Rev Richard hadn’t seen – and read off the co-ordinates. They then got talking about precisely why this man was wandering around the forest, and he said he was a Geocacher, and that he’d just done one of the caches that are hidden in the plantation.

At this point in telling the story, Rev Richard asked whether anybody knew about Geocaching, and I guess was slightly surprised at the people who knew. The reason of course that a lot of people around the Church know becomes clear when you watch our Geocaching video in which our segment is filmed around St James. Various people know about the game having seen us on the programme when it was originally shown, and various others, generally those involved with grounds maintenance know about the game having inadvertently found the cache – indeed the cache has moved twice following occasions when the regular maintenance rendered the previous location unsuitable. The interesting thing is that despite having been here several years, nobody had actually told Rev Richard about the cache. Not surprising really as it’s not usually the kind of thing that comes up in conversation…

Anyway, Rev Richard carried on, telling how the Geocacher had taken him back to the cache he had just found, and the story was used as an analogy – searching for treasure with the Christian search for ‘treasure’. 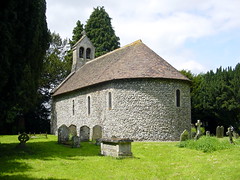 After the service I told Richard quite how close he’s been to a geocache (our Queens Oak cache mentioned in the film) for the past few years, indeed the fact he’s walked past it every day. I also mentioned myself and Beth’s involvement, including us being one of the seven founder teams behind the Geocaching Association of Great Britain, and have since sent him the link to the video. I’ve also taken the opportunity to upload some of the older Geocaching snapshots I have on iPhoto – these ones are from back in 2003, including some shots of the preserved planes a Lasham Aerodrome which figure as clues in a cache, and another church with a cache close by, the almost totally unaltered St Swithun’s Nately Scures, which gives you an idea of what St James must once have looked like before the subsequent generations started knocking through bigger windows and adding bits.

So I guess the question is, has Rev Richard now got the Geocaching bug? 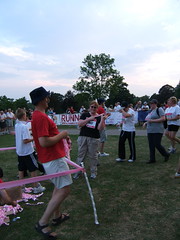 I’ve just uploaded the pictures I took of Beth and a number of other women from St James taking part in the 2006 Race for Life, held in Prospect Park, Reading, in aid of Cancer Research. As some of the people in the St James team were from the Youth Group and Junior Choir, the team shots that include them aren’t generally available, however there are some general views of the scenes in the park, and also a shot of Beth finishing and getting her medal.

As you no doubt will have realised it, it probably wasn’t the ideal day to run a race, as although the event started at 7:30pm, when it was starting to cool, with the record breaking temperatures earlier in the day, it was still pretty warm at the start.

We had a large contingent of people from St James, many running and walking in memory of Rev Sheila, our former priest-in-charge who died as a result of breast cancer. Having said that, as an indication of quite how many lives the disease touches, almost everybody was running for a number of other people too.

The race was divided into two, runners and walkers. At the front were the more serious runners, the fastest of which completed the 5km course in just over 20 minutes. The fastest of the St James participants came in not too long after that, with many of our team coming in between 30 and 60 minutes. Beth came in at 55 minutes, which was just over her target of 50 minutes, partly because she ended up quite a long way back in the walkers at the start.

For such a hot day, there were relatively few problems that I saw – most people drinking lots of water as they went around the course. The organisers also relented over not giving out free water at the finish. Certainly all our participants seemed to have got around without too many problems.

In terms of the money raised, a quick total up amongst about half the team before the race came to about Â£2000 – a really superb total. I’m sure Beth will be posting a full description of what it was like to participate over the next couple of days.

Incidentally, if at this point you are thinking that it is slightly sexist, only allowing women to enter – it is possible for men to get into the race – with a little bit of deviousness. We spotted a couple of men, with valid numbers, in this years race in fairly obvious drag – complete with handbags… 😀 Whether they managed to enter themselves, or whether somebody else entered for them we don’t know. Having said that, the officials didn’t seem to make a fuss over it, and they added to the entertainment on the night.

I’ve had a bit of a binge on sorting out pictures tonight that I took last week at the Choir Swimming Party and Barbecue, and also the shots I took of the Church Fete today.

Both events went well, and on the first couple of outings for our new normal digital camera (as opposed to the phone camera) I’m pretty impressed with the results – take a look at some of the action shots of the junior choir jumping in the pool!

We came back from the fete with a great big gas barbecue (something Beth has been wanting for a while) which we got at about half price in the silent auction. Heaven knows where we are going to put it, we’ll have to get a shed or something!