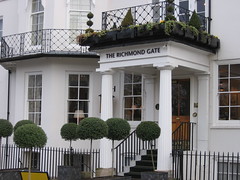 After Jo and Drew’s Wedding last week, rather than drive back home we spent the night in another local hotel, the Richmond Gate Hotel. Basically the choice was somewhat limited when we booked as I wanted a hotel where we could actually park the car – a number of the hotels in Richmond have little or no car parking at all – and the Richmond Gate was about it.

You can read my review of the hotel on TripAdvisor, what I wrote on there is pretty much what I put on the feedback form. Looking at the other reviews for the hotel, and also for it’s sister hotel next door for both the experience does seem to depend very much on which room you get.

In terms of the Richmond Gate there are rooms in the nice Georgian part at the front of the building, but the majority of the rooms are in the modern three-storey block out the back where we were – and they charge extra for the bigger ‘feature’ rooms anyway. Being a modern design though, all of the standard rooms in the block out the back are the same size – small. Looking on the hotel’s website some of these do appear to have been refurbished, but they won’t have been able to do that much about the size of the rooms. They could shrink the bathroom, but that won’t do that much good really as fundamentally I think the basic room is small for the amount they are charging, however many toys they try to add.

So whilst there was nothing overly wrong with our stay, I thought it was expensive for what we got. The room was small, and basically a bit tatty as it had yet to be refurbished. I filled in the form, but didn’t much expect a response. However a couple of days ago I actually got a letter from the manager at the hotel apologising for the room and highlighting that they were refurbishing the rooms, and that our room hadn’t been done yet and offering us a complimentary upgrade to a superior room the next time we stay there in the next year – not that I think we’ll have call to use it though… But it’s nice to know somebody reads those things.