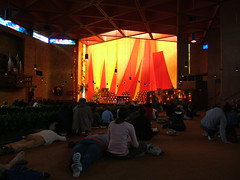 We’ve just returned from a week spent near the Taizé community in France. As with our previous trips we weren’t staying on site, but instead in a friends cottage a few miles away, allowing us to combine attending services at the community with visits to various local sights – rather a lot of which were churches though…

One of the questions that several people have asked is whether the community is any different after the death of Brother Roger, who although he was going to retire as prior of the community anyway later that year was killed during the prayer service on August 16th, 2005. His designated successor, Brother Alois took over, and has been prior ever since.

Firstly there have been some subtle changes, for example at services Brother Roger used to sit right in the corner of the monks area. Brother Alois still sits towards the back, but the lectern is now where Brother Roger used to sit. It is also noticeable that Brother Alois is not right at the back. He sits in the centre, but about a row forward, with six fellow brothers on either side, and an area containing directly behind him. I’m not sure whether it is a deliberate rearrangement for security, but although it is only really noticeable when you think about it, during the services at least, Brother Alois is a little further away from the public. To be honest any real security would be unnecessarily intrusive, so it just seems like a sensible step.

One other change that in my opinion is certainly for the better, is there isn’t the almost cult following that used to surround Brother Roger. Reading about him, you realise how humble the man was, and how much he wanted to avoid a cult of personality growing around him. However one of my abiding memories of previous visits were the crush of people that surrounded him after services, wanting his blessing. Brother Alois is significantly less well known, so although after services there is still a queue of people wanting his blessing, the impression is much more ordered and a lot less like the pressing crowds that used to occur with Brother Roger.

Having said that, Brother Roger is still very much present through his books in the shop, and of course in the ecumenical spirit that remains. The passing of Brother Roger certainly doesn’t seem to have dispelled the popularity of the community with thousands of people on site, and the church full for services.

With regards to the services, there was the familiar mix of old and new chants, making you pretty much feel at home if you’d been before.

Perhaps the biggest annoyance this time was perhaps a result of the rise of the cheap digital camera in that they have a significant problem with people ignoring the flash photography ban. There are (and always have been) signs at the door to the Church asking for photographs not to be taken, in much the same way that at St James people attending weddings are asked not to take flash photographs during the service. Despite this people are taking photographs during the services all the time it seems – indeed we sat behind one group of older people who even when one of the ushers came over to ask them to stop taking pictures tried to take pictures around him! Of course the ironic thing is that using flash in the conditions inside the Church during a service is going to result in a pretty lousy picture anyway, as the flash won’t illuminate what they’re trying to take a picture of anyway. I certainly think that particularly at moments such as the prayers around the cross on Friday night, the atmosphere gets blown by the multiple flash bulbs that occur when the brothers move to the cross. (Incidentally, the shot above was taken about half-an-hour before a lunchtime service, without flash.)

So in answer to the original question, I think I can safely say that the Taizé Community continues despite the death of Brother Roger – and certainly the experience is much the same as it has always been. Any concern that it might change after the events of 2005 don’t seem to have materialised.

Typical – I’m away on holiday and totally offline for a week, and Apple launch a whole load of new stuff including iLife ’08, iWork ’08 (which has beaten Microsoft themselves in producing an application that can actually open Office 2007 documents), a speed bump for the Mac Mini, and last but by no means least, a new look aluminium and glass iMac with a brand new keyboard design – although quite how usable the new ultra-thin design will be remains to be seen.