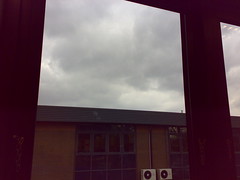 There is nothing the British seem to like more than moaning about the weather. This time last week we had a nice warm spell with above average temperatures, however during that whole period the weather forecasters were predicting a cold snap. MetCheck has an explanation of why – essentially the high pressure front that brought us the warm weather in the previous week combined with low pressure over Scandinavia causes cold air to funnel down from the North Pole – hence the countrywide snow fall and chilly temperatures we’re having now. However we still had people moaning about it at work, and a bit moaning online too, almost as if it heralded a new ice age!

It’s not actually as if it is that unusual – certainly I can remember snow around Easter time on a couple of occasions, and I have a definite childhood recollection of it snowing in June when we were having a family picnic on Chorleywood Common. Thanks to the wonders of Google I found this page about late season snowfall that regards snow in March and April as common enough not to be discussed, and talks about snowfalls in May and June – and does indeed seem to confirm my memory in that it discusses widespread sleet and snow showers that occurred on June 2nd 1975, and were seen as far south as Portsmouth, Sussex and Kent.