For the winter tyre naysayers that say they don’t make a difference, this is a shot of the car park just before church this morning. For those who don’t know St James’ it sits on top of a hill, at probably the highest point in the village. The line up of cars are all 4×4’s plus ours with winter tyres. Whereas in previous years our car wouldn’t be able to get the traction to get up to the top with the winter tyres it managed it with only a slight flicker from the traction control when it reached the top. Only one other two wheel drive made it, but that got stuck near the top and needed a push. The clearance teams had managed to clear the hill by the end of the service so I suspect the 11 o’clockers will have an easier run, especially as the snow is thawing a bit now.

In terms of how they drive on a clear road there is not much difference, however on snow and ice they feel a lot firmer, actually feeling a bit of resistance – I had to really push it to get the ABS to activate even on an uncleared road. You still need to take care, but the drive feels way more secure than the usual low profile summer tyres. 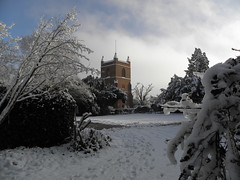 This year was the first white christmas I have ever experienced. Looking around the area things all looked pretty much like your average greetings card picture (or the atypical English winter depicted in The Holiday), so we got some nice pictures of the church thanks to Richard Owen who brought his camera along with his shovel. By the 24th it was just about possible to get around, but back on the 21st December, most people around here were wishing for anything other than a white christmas, indeed for many of them getting home would have been a bonus.

I was somewhat lucky in that I can see the main road from my office, so as the snow fell and the traffic grid-locked, I stayed put. In fact along with about twenty other stranded staff I was shouted dinner by our chief executive and a couple of other directors who were also stuck in the office. By about 8:30pm, in Camberley at least, the roads were clear and I could head for home. Whilst the snow levels increased as I headed into Berkshire, the roads were passable enough for me to make it home in about an hour.

Others were less lucky. The wife of my cousin who works in Reading and lives in Amersham had a hellish eight hour journey through the areas with the biggest snowfalls. Similarly several friend who work up near Oxford had five hour journeys as again the motorways ground to a halt. Locally there were several accidents on major routes leading to traffic slowing to a halt, and trapping the gritting trucks in the jam. The situation in Basingstoke actually made the national news.

Needless to say, this has produced the other staple of a winter event in Southern England, moaning about the local councils failing to keep the roads clear, and numerous comparisons with other countries like Germany and Canada, that don’t grind to a halt in the snow.

First off, it is worth comparing what happens in a country like Canada with here. Yes the local authorities are better set up for dealing with snow, and indeed they have more equipment on standby ready to keep the roads clear, but the important thing to note is that the local drivers are properly equipped as well. It is common practice to fit special winter tyres to the cars, whereas it is unheard of in the UK – pretty well everybody was sliding around on all season or summer tyres – check out this YouTube video for the effect that winter tyres can have. Also once you get stuck, most British drivers are ill equipped. In Canada many drivers will have an emergency kit in the car, certainly Beth when she lived in rural Canada would travel in winter with a warm change of clothes in the car, a shovel to dig the car out in an emergency and a bag of grit to improve traction if needed. If you told most Brits that they needed that, they’d think it laughable, because you don’t get weather like that in England. Needless to say that is exactly the same reason the local councils don’t spend vast amounts of money on equipment that could sit largely idle in between major snow events like we had this Christmas.

It is also worth mentioning, that even in Canada they get disruptive snow fall from time to time, and they can’t deal with everything. What happened around our area last week was after an initial fairly light fall of snow on 21st the forecast was for sleet, which fell initially as rain, and then turned to snow. The problem with rain is that it washes away the grit that is put on the road, if that then freezes, and then snow falls on top you get what we got on 21st – a layer of ice with snow on top – treacherous even with good tyres and experienced drivers, let alone with most UK cars.

But I’ve been in Canada in similar conditions.

One winter trip over to Alberta it rained on the Tuesday, froze overnight and then snowed on top, leading to precisely the same sorts of conditions as we had – a layer of ice covered by snow. It was chaos. The local news swapped between pictures of chaos across Calgary, with removal trucks stranded by sheet ice, multiple accidents on the major roads, and hauled up the council staff responsible for maintaining the roads who tried to explain how they’d done their best, but there was nothing they could do. Even several days later when we headed for the airport many roads weren’t clear of ice despite the road crews working around the clock to clear it. A trip that would normally have taken us three hours took over six.

The moral of the story is that snow and ice causes chaos, even to those most experienced at dealing with it. Sure the UK could invest much more money in snow clearance, and they could mandate that all drivers fit winter tyres for the winter, but when it comes down to it, most people I’m sure would consider it not worth the money, whether out of their own pockets directly in buying a second set of tyres for their cars, or indirectly through the increased taxes to pay for the equipment. And even having spent all that money, there will still be the occasional times like this last week where however much grit you use, and however much the councils try to clear the roads, things will still grind to a halt.

I still haven’t got around to doing my pictures, but Beth has uploaded a couple of short clips she filmed whilst we were driving from Jasper back to the airport in Edmonton on Friday morning. In Jasper itself there was only a dusting of snow on the cars and rooftops – this was what greeted us a few minutes outside town on Highway 16 – the main road back to Edmonton. The conditions continued like this to Hinton, about 75km further down the road, and then the snow gradually got less until there was no snow at all when we reached Edson the next big town along the road.

Just to give you an idea of the visibility, there is a car ahead of us in both clips. Unlike us they were doing the same journey in a regular car, and turned off once we got to Hinton.

So after the brief snow we got for Easter, and the temperature reaching the dizzy heights of 18 ÌŠC this last week, on Sunday morning we awoke to this…

By the time we had to head up to St James, the temperature had risen slightly and on the roads the snow had melted. However we still got a pretty view as we made our way. The video below is the view from the front of the car heading up the lower part of White Horse Lane, complete with a horse coming the other way, and an example of quite how little snow some people remove from their cars before setting off… 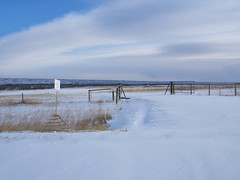