Thanks to a bit of schedule changing by the BBC, this week we got a double bill of new Torchwood episodes, as BBC3 take over showing the first run of the new episode every week.

First up we have Adam. Gwen returns after some time away with her fiancee Rhys to find a stranger called Adam working at Torchwood even more strangely everybody else seems to know him, and indeed to think that he has been working there for three years. However, then Adam comes and touches her on the shoulder, and suddenly she has the same memories as everybody else. Things get really odd though when she goes home and summons the rest of the team because there is a stalker in her flat – the stalker being Rhys who she now totally fails to remember.

As with so many episodes, this was a rehash of a common sci-fi staple, using a loss of memory, and an external character to play with the dynamics in the main cast – the Next Generation episode Conundrum being another example that sprung immediately to mind. With the Torchwood episode, unlike Conundrum it is not quite clear whether Adam has any kind of wider ulterior motive, aside from wanting to survive – although he seems to thrive off allowing Jack to recover his childhood memories – but equally he starts to destroy these by the end of the episode.

Adam is eventually discovered when Ianto reads back in his diary and discovered that Adam is never mentioned. At this point Adam tries to keep Ianto quiet by creating memories of committing three gruesome murders in his memory, and then creating the memory of himself helping Ianto to hide the evidence. This causes such a dramatic change in personality for Ianto that Jack checks back in the CCTV logs and sees what has happened. Jack then helps his team, and finally himself to remember who they were, and to forget the last forty-eight hours, thereby erasing Adam from existence.

As a vehicle for exploring the characters, Adam works pretty well. Adam has manipulated Owen and Toshiko into almost diametrically opposite personalities, and even planted the memory of an affair in Toshiko such that she is willing to go up against Jack in Adam’s defence. It also gives an opportunity to add a bit of backstory to Gwen and Rhys as they try to rediscover Gwen’s memories. Last but not least we get to see Jack’s childhood memories (although notice nobody ever uses his name – so that secret is still kept) on the Boeshane Peninsula.

On a more general level, it also explores how much people are defined by what they remember, good and bad – indeed to take them back, Jack gets the team to each focus on key memories that define who they are.

P.S. Bonus points for anyone who can use their Bradley Branning levels of obscure Doctor Who knowledge to identify the source of the quote I used as the title for the post…

For those not aware, this is a definite change of direction for the Star Trek movies in that they’ve handed control to a totally new team, and aside from Leonard Nimoy, no original cast members are involved – and William Shatner is still moaning about his character having been killed off…

J.J.Abrams has already stated that almost any way to involve Shatner into the movie would feel like a transparent fanboy attempt just to get him in. Certainly that bodes well for the movie having a good story rather than being like some sort of fan movie at a convention. You can watch a video of J.J.Abrams talking about his ideas on storytelling in a TED video that I linked to a couple of weeks ago. The wikipedia article on the film is keeping pretty up to date with casting and production details.

Anyway, the trailer takes a few cues from the opening titles of Star Trek: Enterprise with soundbytes from the space race in the 1960’s layering into Leonard Nimoy delivering a very familiar line as the camera pans over the Enterprise. Certainly watching this the change of direction is pretty clear, and I’m looking forward to what J.J.Abrams makes of the franchise. 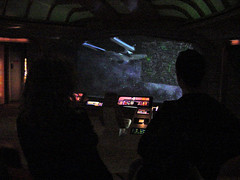 A few years back, Hyde Park hosted a big Star Trek exhibition, which as the fans we are we went up to see. Alongside various other recreations, the exhibition finished off with a recreation of the bridge set from Star Trek: The Next Generation complete with a little action sequence as the ship comes under attack. 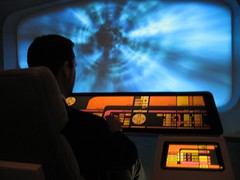 Reading Wil Wheaton’s blog this morning, I came upon this post which is about his visit to the gala opening of Star Trek The Tour in Long Beach, which seems pretty similar to the exhibition we saw in London – but he has much the same sort of shots as we took on our tour, so you get him leaping through the Guardian of Forever, plus a shot of him on the bridge – although being a star of the programme, he got a seat…

It’s really quite amusing that even if you’ve been involved in the programme, it still seems to be a thrill to walk onto the bridge at that exhibition, and get all the same cheesy shots the rest of us do!

The nominations for the Nebula Awards are out, including a nod to Steven Moffat and Doctor Who, with Blink nominated in the script category. What is perhaps a surprise though is the inclusion, alongside Blink and a selection of major film scripts, of the script for an internet only Star Trek fan film, with a nomination for the Star Trek: New Voyages episode World Enough And Time.

This one almost certainly comes under the category of ‘a bit too much time on their hands’ – but have you ever wondered what Star Trek: The Next Generation would look like with Dallas style opening titles?

Me neither – but this is it…