There is a bit of a double act going on between Grant Shapps (@grantshapps) and Eric Pickles (@ericpickles) on Twitter at times with one promoting the other. One such bit of promotion came last week when Grant Shapps tweeted the following:

Eric Pickles standing up for England’s counties and 1,000 years of English history – http://bit.ly/aD1Z0Z

The link points to the Telegraph letters page of August 11th which part way down features this letter from Eric Pickles:

SIR – I share the public’s concern (Letters, August 9) at the recommendation of the Postcode Address File Advisory Board to delete counties from the Royal Mail’s address database by 2016. It speaks volumes that unelected officials regard our counties – and over 1,000 years of English history – as a “vanity attachment”.

But the new Government is taking steps to defend our counties. We have scrapped Labour’s gerrymandering which sought to break up the counties of Devon, Norfolk and Suffolk for electoral advantage and we are dismantling the tiers of regional assemblies and development agencies.

It is a response to the recent news that the Royal Mail will no longer include counties in official addresses – and as you can see Eric Pickles uses it as an opportunity to pledge to protect English counties.

I have to say I greeted that with a good deal of amusement, the reason being that I live in what was once the county of Berkshire one of the oldest in the country, which exists now purely as a ceremonial county, and it’s not been Labour gerrymandering for electoral advantage that has reduced the county to a mark on the map, it was the Tory Local Government Act 1972 that transferred a chunk of the county including the former county town of Abingdon to Oxfordshire in 1974, and then the previous Tory administration gerrymandering for electoral advantage that abolished the whole county in 1998 – John Gummer chose to ignore the recommendations of the commission leaving Berkshire with six unitary authorities.

So what is the effect? For us in our little village at a simple level it means significantly less representation. We have a single local councillor, who we can only vote for once every four years, for the other three years our opinion counts for absolutely nothing. Under the old two tier system we had representation at both local and county level, and many more opportunities to vote.

Looking wider, we now have six authorities fighting with each other. We saw it with the endless debates over housing allocation where Wokingham District fought and lost the battle with the other authorities – each authority purely focused on their own people. Even government documents such as this concede that the six small unitary authorities don’t work in the best interests of the people, check out this paragraph on page 5:

The unitary structure of local government across Berkshire makes it difficult for other stakeholders to engage on issues that cut across boundaries. This is further complicated by the range of political views and agendas within and across the local authorities, and by the fact that changes across other public sector bodies do not align with the Local Authorities or each other (e.g. Police, Primary Care Trusts and Learning and Skills Council)

The size of the authorities causes problems too, I remember a number of discussions with local teachers of the problems, for example the peculiarities caused by Wokingham outsourcing much of their education to next door Surrey, or the fact that school repair projects that were approved by Berkshire were dropped by Wokingham who had more limited funds. We still have the effects now more than a decade later with many students being educated in schools in adjacent authorities rather than their own, purely because villages in the west of Wokingham are closer to schools in West Berkshire, students in parts of Reading are closer to schools in Wokingham.

That also highlights a missed opportunity – Reading still doesn’t have one authority overseeing a strategy for the whole town. A large chunk towards the south east of Greater Reading is in Wokingham, indeed most of the University of Reading is in Wokingham. Over in the west another chunk of the town is looked after by West Berkshire. In both cases there is no clear divide between the areas, but the historic borders were retained.

So will the Tories stand up for England’s counties? I don’t know, but as a resident of the former county of Berkshire their past record doesn’t bode well for the future. 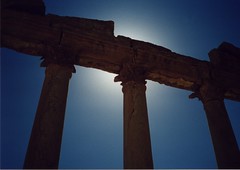 Following on from my hard drive troubles at the weekend I’ve uploaded a whole batch of scanned pictures I managed to salvage from the drive, all of which probably come under the category of archive material!

There are several group shots, including a picture of the class of ’91 from my school, most of my Computer Science course from 1994, the employee group shot from Flagg Ranch where I worked during summer 1993 and a shot of the development team at my first job. I’m a lot easier to spot in some of the pictures than others, but I am in all four.

There are also a couple of scans of cuttings relating to the Geocaching video I posted a couple of months back.

The biggest set is a whole load of pictures from our wedding back in 2001 – not the official shots but a mixed bag of pictures from the table cameras, and various other snapshots people took. You can also see the house Beth lived in when she first moved to the UK.

Alongside all of those are a kind of ‘best of’ selection of some of the pictures I took on my trips to Morocco, and to Syria and Jordan. This one of Petra will probably be familiar to anybody who has come to our house as an enlargement of it hangs in our hallway. The picture above is one from my Morocco trip, and is my being experimental with shooting pictures of the Roman ruins.

Tonight, for the first time in ages I went along to a British Computer Society meeting. Although I’ve been a member for many years, either I’ve been busy elsewhere, or not interested in the topics that the meetings have covered. In general I’ve just not really felt the need to go along.

However tonight was a bit different, as they had invited Peter Gradwell, who runs gradwell.com, the company that hosts both this blog, my e-mail, and the other domains I look after. Over the past couple of years gradwell.com has been moving into VoIP and his session tonight was a whistle-stop tour of the whole subject looking at both small scale single user solutions right up to big multinational corporations. It was certainly a very interesting and informative session, particularly the point that VoIP itself isn’t the reason why call charges appear cheaper, indeed he suggested that in most cases if you called the USA from the UK using a VoIP service in the UK, the call would almost certainly drop back onto the normal phone system in the UK rather than crossing the Atlantic on the internet.

Other interesting bits of information from the evening were that if you’re worried about your calls being intercepted then currently VoIP is the way to go as governments are playing catch-up and can’t currently listen in. Having said that they are keen to try and find a way, as it is believed that terrorists are now using things like Skype to communicate for precisely that reason. He also explored the issues of 999 calls over VoIP and the associated problems, which also included a pretty detailed description of how the location issue was solved with mobile phones and 999 calls.

It was definitely a worthwhile way to spend the evening, my only disappointment was that having swapped a number of e-mails with Peter I didn’t get a chance to talk to him. After the session he was surrounded by people with lots of VoIP questions, so I headed for home.

Aside from being the first BCS meeting I had attended in a while, it was also the first time in a long while that I had been back to the University of Reading. Thinking about it, it is now more than a decade since I graduated. The meeting was held in the Palmer Building, which has been refurbished since I was there. The car parking situation hadn’t improved though. There were also familiar faces amongst the other attendees, one of which was Dr Shirley Williams who taught a number of my courses when I did my degree. (In fact looking at the list of staff it is interesting to note how many of the names are familiar.) What was also interesting was comparing the crowd at the meeting with the crowd of people who turn up to something like the Geek Dinners. Now the basic principle seems the same, get together a load of IT people, and an interesting speaker, however the atmosphere is totally different, with the BCS meeting being pretty dry in comparison to the Geek Dinner. Also whereas in the Geek Dinner situation I’ve met all sorts of interesting people, I really didn’t speak to anybody in the same way at the meeting, despite being a new face. Interestingly the meeting had to move rooms from the 32 seat room that was booked, which does maybe imply that I’m not alone in not going along, and that the meetings are often poorly attended. Certainly I think it might be an interesting experiment for the BCS to try out a Geek Dinner style meeting.