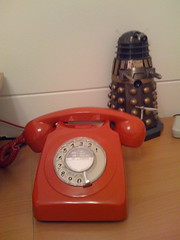 Just thought I’d share a picture of a couple of little â€œden warmingâ€? presents to celebrate having a working setup in our new den, and give a quick update as to why it’s been a bit quiet around here recently. With regards to the den, it’s a great little space to work in – cosy without feeling too crammed. We’ve got the basic stuff we need all set up and running, although we haven’t quite finished the job of clearing out the front bedroom, largely because the routine trip to the hospital threw us a bit of a distraction.

On Tuesday we had the glucose test for gestational diabetes. We’d actually been given the test largely because we were on the observation list anyway, and the consultant suggested Beth take the test – the implication was that had we not been on the observation list anyway we wouldn’t have had this test. To cut a long story (and a lot of waiting around at the hospital) short the test didn’t come up totally clear. The result is a glucose level where between 7.7 and 11 puts you onto an extra observation list, and higher than 11 means more significant treatment is needed. Beth’s result came out at 8 – borderline, so a more stringent watch on what Beth is eating, and regular blood sugar checks. As one of the results of gestational diabetes is an increase in birth weight of the baby it also means that we get much more regular scans of the baby – once every four weeks, whereas by this point most other potential parents wouldn’t get another scan.

Anyway, I’ve digressed slightly – back to the â€œden warmingâ€? presents – the Dalek wall clock is a cheesy but pretty self-explanatory addition, although it does light up when you turn off the lights. The phone however is one of the Firebox.com Retro Telephones, which is precisely what it looks like a refurbished GPO issued original phone complete with bell ringer, and pulse dialling. It was a slight bit of a gamble as since we have a network cable into the den rather than a phone extension we’re using a little Vonage box to get a phone connection. The amazing thing is that the cutting edge VOIP box, in this case a D-Link VTA, is quite happily taking the old style pulse dialling without any problem. From a quick trawl around the internet it seems that it’s not consistent across all the VOIP adapters, and is dependant on the chip set being used, in this case the Texas Instruments TNETV1015. The phones come in hotline red like this one, and also in black, a snazzy/hideous (delete as applicable) target colour scheme, or for the pink lovers around, a tasteful two tone pink. Being pulse dialling you are going to have problems doing anything that involves pressing numbers on the keypad, but as a little bit of history that is still usable it is a great addition to the desk.

Today we both gave Vonage a first go with the Wi-Fi phone that turned up last week. During the week I’d set the phone up, which despite it being pre-programmed to our Vonage account, took a good hour of fiddling with the router, so I guess the promised ability to make calls from any wi-fi network are a little optimistic, especially as the problems I had were not due to the access security I have on the box. The problems came from the fact that for obvious reasons I run a firewall on the router, and to work, the phone needs certain UDP ports opened. This adds another problem, which is that the handset then needs to remain on one IP address on the router – if it ever were to change I’d have to change the port forwarding.

Also, as Garry pointed out, unless you’re phoning another Vonage user it’s really not that cheap – certainly there are regular providers, who work with our existing number and wiring, who are cheaper for calls to Canada.

Anyway, after sorting out the handset, today both Beth and myself tried them out for calls, Beth for a relatively short call, and myself for about 30 minutes when I phoned my parents. Firstly, we both noticed the effects of the compression, with periods of total silence when the person on the other end wasn’t talking. Whilst you can often hear something similar with transatlantic calls, it’s not usually noticeable on inland calls – indeed talking to my parents I can usually hear things like their cats coming in and starting to purr on the other end. Whilst I guess it would be something we would get used to, and may well just be the effect of the Wi-Fi handset, it is still sounds a bit odd. The other feature I noticed, which is definitely a handset issue, was quite how warm the handset actually got. It wasn’t burning hot like some laptops get, but definitely warm.

It has to be said that one of the main attractions for getting it was the local Canadian number, so we’ll have to see how that goes down, and what use people make of it. Certainly if Vonage UK goes the way of their US operation in waiving their calls to other Vonage countries the whole service will become more attractive. However with the significant disadvantages of not working with our existing wiring, or working in a power cut, or working properly for 999 calls, if we’re not going to be getting a much better quality call for our monthly fee, it certainly doesn’t seem like an attractive proposition.

Recently Vonage one of the big names in the VoIP arena announced a deal with The Cloud in the UK to allow free access to all of their hotspots for the Vonage Wi-Fi phone. This piqued my interest, as with the phone, for the flat rate of Â£7.99 a month the phone allows you to make and receive phone calls for free to any UK land line number. Indeed the Wi-Fi phone can connect to any wireless network anywhere in the world and give you free calls to any UK land line.

Looking at the site, although it seemed like a good deal, aside from trips to Canada, where it could significantly cut the cost of phoning home, it didn’t give much of a price advantage over our existing long distance provider. However, on digging through the site a bit further, I found the Virtual Phone Number option on their list of additional features. What this provides is a second phone number for the account in any of the countries in which Vonage provides service, which includes Canada. So although it didn’t save us any money with outgoing calls to Canada, we could set up a phone number in Alberta, and then our friends and family in Canada could call us for at most the cost of a long distance call in Canada, rather than an international call.

A bit of background reading found that Vonage isn’t compatible with Sky boxes, so we couldn’t get rid of the BT line even if we were able to (the broadband connection goes over the BT line). Also a concern was that none of the Vonage hardware actually offers the fallback to a normal phone line that routers such as the Speedtouch 716 (emergency calls are still somewhat of an issue with VoIP, and of course unlike a normal phone, it won’t work if there is a power cut) which would have been a show stopper. However I found that since the Vonage configuration allows us to forward calls to our numbers to any other number, we could forward the calls on our Vonage numbers to our normal BT line at no extra cost, allowing us to carry on making use of the extensions in the house, stay within our Sky agreement, but still have a Canadian number. The only restriction would be that we would have to make outgoing calls on the Vonage phone rather than any of the others.

So with all of the issues addressed, we took the plunge, and now have an additional line with a Reading number, plus a Medicine Hat number in Canada. Beth’s parents gave the new number a try, and found that as well as saving them money, the call quality was much improved to, Beth’s Dad said it sounded like Beth was in the next room rather than thousands of miles away. The one irony though is that since we could only get Canadian numbers from a limited number of ranges in large towns and cities (Calgary, Lethbridge, Red Deer or Medicine Hat near Beth’s parents) it is still a non-local call for Beth’s parents to reach our Medicine Hat number. Indeed such are the confusions of phone costs, and the level of UK competition in the market now that their call from Jenner to Medicine Hat using the regular phone company still costs slightly more per minute than if we called them on our long distance provider from the UK! (Calls to Canada on both Vonage and Call18866 who we have been using up to now are only 2p per minute.)