Having been watching Robert Scobles series of pictures from his Smartphone on Flickr come through, I thought I’d take another look at getting Flickr uploads going from my little K750i. A little bit of a dig around came up with Shozu, a little app that has received glowing reviews and lots of interest. A look at the supported phones list included the K750i, so I signed up on the site, and waited for the SMS message with the download.

That arrived within a couple of minutes, and I clicked the link to download. The phone connected to the internet, but then almost immediately dropped the connection, and came up with a download failed message. I tried it a couple more times, and the same effect. At this point I went through the Shozu help document, which recommended getting the internet settings again, which I did – all the variations, and the same problem on each of them. I then tried downloading the file on a desktop, and sending it via Bluetooth. The desktop machine successfully downloaded the file, but then it again failed when I transferred it over to the phone.

Next I thought I’d use the SonyEricsson update service to make sure my phone was all okay. Now this did decide to install an update, however post update, exactly the same problem. 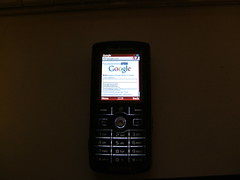 At this point I wondered whether there was some problem with downloading Java over my connection, so I had a look around for another suitable application. The one I chose was Opera Mini. Now it has to be said that I don’t really use my phone for web browsing – the choice of Opera Mini was more from the point of view of it being a Java application that was connecting to the internet. The Opera Mini download was straightforward, and once I’d tweaked the Java internet settings on the phone worked fine, as you can see from the picture. However Shozu still won’t download. I’ve e-mailed their support, but after twenty-four hours, have heard absolutely nothing, not even an acknowledgment of my e-mail.

Anyway, not having Shozu may be annoying, but I probably wouldn’t have installed Opera Mini on my phone had I not been having the problems, and to be honest I would have been missing a great little application. Compared to the usual mobile phone browsing experience it is streaks ahead. You can read all the technical wizardry in their introduction flyer, and it is really quite impressive what a good job it makes of most web pages. In fact I’d say it is probably a better experience than trying to use Pocket Internet Explorer on a PDA! Certainly if they had a Pocket PC version, I’d download it tomorrow.

So, in conclusion, I’d love to say how great Shozu is, but until I can actually get the thing installed, I can’t. However, I can say that if you have a suitable mobile, you should grab a free copy of Opera Mini as soon as you can!

One thought on “Shozu and Opera Mini”