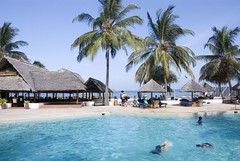 Until last night, for members of the press, the Primates Meeting in Tanzania has been a somewhat boring affair. Firstly, the meeting itself has been kept carefully separate, so effectively the media have just had to sit around by the pool and gossip. Such is the flakiness of the internet connection, that in fact Ruth Gledhill who has stayed in London is able to produce just as complete reports as Stephen Bates. Largely it seems that those over there have been left with nothing much to do but sit by the pool sunbathing.

The reason the press has been so bored, is that up until now, events have not gone according to the script. First off, thanks it seems to a bit of strong leadership from the Archbishop of Canterbury, Bishop Jefferts Schori, and the Archbishop of York John Sentamu (invited by Rowan Williams to represent the Church of England allowing him to focus on chairing the meeting) were allowed to stay, and other primates didn’t leave. Yet again it seems that it is an example of how in this whole sorry affair, people are happy to try and boot another group out, but won’t leave themselves.

Following that, the report that was widely expected to back the conservative line that the Episcopal Church was ‘in breach’ of the Windsor report, actually came out and said that they were pretty much in line – more than that it criticised the anti-Windsor actions of people like Archbishop Akinola who have been setting up Churches in the US, as reported by Stephen Bates. Having said that this did produce some reaction – but again this was on the web, not from the conference centre. 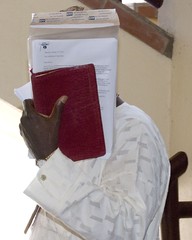 There was a bit of excitement yesterday, when Archbishop Akinola, returning from a meeting outside the primates part of the conference centre got spotted and cornered by the press – although he was less than talkative…

However, the press got a little bit of division last night, when seven of the primates failed to attend the communion service – although it should be noted that this was half as many as failed to attend at the previous meeting two years ago. This does seem to be the first bit of real division that has occurred amongst the primates. Giles Fraser predicted the tactic:

Especially keep in mind the first principle of effective warfare: take their strength, and turn it into a weakness. Make them feel they are fighting for the truth of the gospel. Make them feel that everything hangs on it; that itâ€™s all down to them. That way, they will be able to justify any behaviour â€” cruelty, bullying, division â€” and eventually the whole thing will collapse in bitterness and recrimination. Allow them to do our work for us. The fact that they wonâ€™t take communion together is a cracking start.

Alongside this, last Sunday Ruth Gledhill compared this sort of behaviour to what happens to her five year old son.

Putting it in to context, in the Guardian today, Giles Fraser also highlights quite how much this high level Church politics and globe trotting really matters:

For the communion allows bishops of crisis-stricken dioceses to get on a plane and reinvent themselves as players on the world stage. Many parishes see less and less of their bishops as they clock up the air miles.

In the traditional Church of England, the parish is the unit that matters to most worshippers. And at the level of the parish, the crisis in global Anglicanism is irrelevant. While bishops and archbishops squabble and plot, the local church gets on with saying its prayers and caring for the needy. These faithful are now being badly let down by their leadership.

So what will be the outcome? I really don’t know, but I’m half expecting a compromise to be reached. Look at what’s happened. In terms of the conference, aside from the publicity stunt last night, there have been none of the predicted walk-outs, and as Giles Fraser has pointed out, how relevant will whatever happens be to the people on the ground anyway? Thankfully Dave Walker (sadly another person who couldn’t find a news organisation or Church expense account to fund a week in the sun) is on hand to put it all into context.

Archbishop Akinola avoids the press and The White Sands originally uploaded by scottgunn.