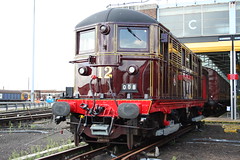 Back in the late eighties and early nineties, for a number of years London Underground ran a number of successful Steam on the Met weekends. It all started with a celebration weekend in 1989 to commemorate the centenary of the opening of the Metropolitan Railway into Chesham, using Met 1, the last remaining operating Metropolitan Railway steam locomotive. That first weekend was so successful that the railway organised a number of follow up events, mainly running between Watford and Amersham, but including special parallel running of trains on the main lines up from Harrow. The event was all staffed by volunteers – believe me you’ve never seen so many of London Underground’s management as you did on those weekends, and it seemed popular with passengers and staff alike – so popular that they quickly got to the point of having to bring in mainline steam locomotives rather than Met 1. On the summer weekends when it ran you could sit outside in Mum and Dad’s back garden and once again hear steam trains working their way along the steep climb up Chorleywood bank.

The steam trains weren’t the only stars. All the trains needed a non-steam backup loco, and whilst for some trains it was a second hand diesel loco bought from British Rail, others used another Metropolitan Railway original, Sarah Siddons, one of the Metropolitan electric locomotives, which having been built in the nineteen twenties was older than some of the steam locomotives it was acting as backup for, was used for support.

Then in the mid-nineties the event was cancelled. There were a number of rumours as to why. Some cited health and safety concerns, but others talked about the management changes at London Underground in the lead up to the part privatisation, saying that the heritage weekends weren’t compatible with a commuter railway.

Since then, Sarah Siddons has been retained, and has run occasional special trains, however on September 14th, it’s not quite Steam on the Met, but London Underground are running a special heritage day using Sarah Siddons, and also a preserved train of 1938 Underground stock, following the Amersham, Watford and Harrow route that was used for the previous events. Based on some of the pictures coming through on Flickr they seem to be putting some effort into the event as well. Sarah Siddons has had a new paint job, and the set of retained heritage coaches (also picked up from British Rail) have all been refurbished too. Is it a prelude to resuming the steam events? I’m not sure, I guess we’ll have to wait and see what happens with this event.

Today, the CrossRail project was finally given the go-ahead.

To give you some idea of how long the project has been trying to get the go ahead, it was originally announced when I was still at school and Margret Thatcher was Prime Minister but ever since then nobody has stumped up the cash to actually complete the project.

The basic idea behind the project is simple – getting across London by public transport is very slow. If for example you want to take the train to get from Essex to Heathrow Airport it involves taking a train into central London, then taking the Underground – probably the Circle Line – around to Paddington to catch the Heathrow Express. The line proposed is a new high speed route running under central London on an East/West route – something that would make that journey a lot quicker and simpler.

Back when the route was originally proposed it was a bit more extensive, with a branch running out to Amersham and Watford, and extending as far as Reading. What has now been given the green light is not quite as extensive with the line only reaching as far as Maidenhead in the west, with a branch to Heathrow. Needless to say from a personal point of view that does slightly lessen it’s convenience for us out here as we’d still require a train change at Maidenhead – having said that it certainly will make getting into central London a lot more convenient. Sadly though it won’t be ready in time for the London Olympics – probably the biggest upcoming event that would benefit as the railway won’t be finished until 2017, five years too late.