Had an interesting time in a certain large store in Reading earlier today. I was in getting a cable for my iPod, and was in the queue behind a couple who were trying to return their recently purchased laptop because it had Vista on it and not XP. The sales assistant was very much trying to persuade them not to return it by telling them that they couldn’t get a machine with XP any more, and how they’d have to buy second hand, and so on and so forth.

To be absolutely blunt, that is rubbish – what he was actually saying is that his store wouldn’t sell them a new machine with XP. At that point I cut in and said that it was still possible to find a machine with XP – Dell being probably the best known example of a manufacturer still doing so (albeit to a limited extent), and the example I gave.

At this point the sales assistant looked shifty, and started ringing up the refund, before remembering that they had some similar laptops in their sale that were still running XP. Must have just slipped his mind I guess!

I got an e-mail from a friend yesterday with a bit of a challenge. They currently have an original 15 inch MacBook Pro and are looking to upgrade. The laptop primarily gets used under Windows, so they are trying to find an equivalent PC rather than have to pay out for a copy of Windows on top of the copy of OS X that will come with the machine. The challenge is set out below:

Men (and woman) of geeky tendencies, I require your assistance.

Itâ€™ll need to support 3Gb of RAM (maybe 4Gb if I go 64bit), and be capable enough to run many virtual machines, as well as all the latest games with prettiness turned up (UT3, Iâ€™m looking at you.). Would be nice it were no heavier than 2.5Kg.

The 2007 edition of the MacBook Pro ticks a lot of boxes, but Iâ€™m not sure about paying the OSX tax to get what will in effect be just another XP laptop.

What are Sony, Toshiba, HP, Dell, Alienware etc doing in the lightweight gaming laptop space? Have I missed out a manufacturer who is doing great things? What would you recommend?

My thoughts are that there aren’t many options at the moment since many of the laptops in that form factor come with on board graphics which are not really suitable for gaming.

I also think that you’ll struggle to find a design quite as sleek as the MacBook Pro since Apple are building machines using a custom chassis whereas the majority of the rest build their machines with off-the-shelf parts. Having said that, I’m probably totally biased in that I have an Apple machine as my main box and probably wouldn’t run a MacBook Pro in anything other than OS X!

So, anyone got any suggestions?

This morning I had one of those real sinking feeling moments. I got to work, pulled out my Dell Axim PDA and plugged it into it’s cradle hooked up to my PC and rather than the usual screen was greeted with a big error message stating that there was memory corruption and asking me to press one of the buttons to continue. Pressing this caused the PDA to reboot, and then go through the first start-up screen calibration routine before dumping me at an empty today screen.

Now this isn’t the first time this has happened. The first time I had to reinstall all my applications, fix all the configuration – basically it was a long job. After that experience I looked around and bought a copy of Sprite Backup a bit of software that does a significantly better job of backing up a Pocket PC device than the included option. Every morning when I plug in my PDA it automatically takes a backup of the contents of the device – this morning I was very grateful that it did.

The only thing I had to install back onto my PDA was the Sprite Backup software, and then I just had to configure that to use the ActiveSync connection to talk to the other part of Sprite Backup on the PC. Then I just had to select my last daily backup and click the start button. Twenty minutes later after replacing all the missing files and putting back on all my settings the PDA rebooted and everything looked as it should. Then you only have to wait a few minutes whilst ActiveSync, which unfortunately decides that all the replaced contacts and calendar entries are new sorts itself out (just a question of letting it replace the data – the stuff in Outlook is probably more up to date than the backup anyway), and then everything is back to normal.

Seriously, if you’re running a Pocket PC PDA, something like Sprite Backup is an absolute life saver. True if you’re syncing your calendar and contacts to a desktop your information is relatively safe, but even then it still does take a lot longer to rebuild if you have to manually reinstall all your applications – Sprite Backup does the lot. The backup each morning is a bit annoying at times, but I’ll happily take that instead of the frustration when invariably the Pocket PC crashes.

This posting from Wil Shipley reports the response of Marco Pena, a Dell spokesman to the news that the new MacPro’s were up to $1000 cheaper than similar spec Dell machines. The response has to be read to be believed… Some of Will’s suggested alternative replies are quite amusing too. Seriously though, from the response you could almost believe that Dell are so comfortable in their position as a leading manufacturer that they think that they can’t be touched – but $1000 is a big price difference…

As I mentioned last weekend, I’ve set up my work laptop to sync to my Dell Axim x50v PDA. As part of that I decided to take the docking cradle and power supply that came with the PDA to work, since that is where it seemed to be most useful. However I also thought that I should probably pick up a spare power supply for home, so that I could charge up my PDA when I wasn’t at work.

So on Sunday afternoon I took a look at the Accessories pages on the Dell website. Unfortunately on the ‘Cables, Cradles, Power’ page there wasn’t a separate power supply, in fact there was only a single item, a replacement docking cradle. The pages for the cradle listed recharging in the features and benefits, so I figured that this was just Dell not selling the power supply without the cradle. Anyway, I put in the order, and waited.

On Wednesday I came home to a card from UPS, all printed in German, with the German contact number too. After some digging around I got the phone number of the UPS customer service and gave them a call. They said that Dell did not allow them to redirect parcels or have them collected, and that I should contact Dell. I then spent a frustrating twenty minutes trying, and failing to speak to a real person on the Dell support line, so in the end sent them an e-mail.

The issue appears to be that the same policy that applies to their systems, which is that due to the value they won’t deliver to third-parties, appears to be applied right across the board, even for comparatively cheap accessories.

I got a reply yesterday from Dell’s customer service team in the Netherlands, saying that changing the delivery address was complicated, and that they had arranged from me to collect from the ‘local’ UPS depot – local being in quotes as it is actually in Milton near Oxford, an 80 mile round trip from here. 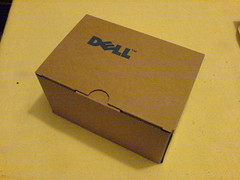 I went off and picked it up after work tonight. Thankfully the traffic wasn’t too bad, so it only took about an hour and a half to do the round trip, including about fifteen minutes hanging around whilst UPS found the box.

I then started trawling some of the other sites, and found that Expansys do actually stock the right power supply, indeed they also stock the cradle too, which since they send stuff recorded delivery, would have only needed a trip down to the local delivery office in Reading to collect. However, the real gem is that even if I get the power supply, I still can’t recharge, as it doesn’t actually include a power lead – you have to get that separately as well.

Honestly, if I didn’t know any better, I’d be sure that Dell were deliberately setting out to totally annoy their customers. Quite apart from the hassle getting it delivered, Dell don’t seem to supply replacement power adapters for their PDA’s themselves, and even when you can get them they are incomplete too. Suffice to say that I’ll be getting accessories for my PDA from Expansys in future and won’t be wasting my time and trouble dealing direct with Dell.