Has anyone who is running Vista had any problems with the 8th January security updates? All of my XP machines updated fine, but I had a call from a friend running Vista saying that their machine had locked up, and when they managed to get it restarted they were getting errors that Security Center was unable to start. Going on to their machine with Remote Assistance all the Security Center services were disabled. Starting those up manually seemed to resolve the problem with Security Center errors, and didn’t seem to cause any other adverse reactions (yet) – so I’m assuming something went wrong in the update. Anybody else had any similar experiences?

Had an interesting time in a certain large store in Reading earlier today. I was in getting a cable for my iPod, and was in the queue behind a couple who were trying to return their recently purchased laptop because it had Vista on it and not XP. The sales assistant was very much trying to persuade them not to return it by telling them that they couldn’t get a machine with XP any more, and how they’d have to buy second hand, and so on and so forth.

To be absolutely blunt, that is rubbish – what he was actually saying is that his store wouldn’t sell them a new machine with XP. At that point I cut in and said that it was still possible to find a machine with XP – Dell being probably the best known example of a manufacturer still doing so (albeit to a limited extent), and the example I gave.

At this point the sales assistant looked shifty, and started ringing up the refund, before remembering that they had some similar laptops in their sale that were still running XP. Must have just slipped his mind I guess! 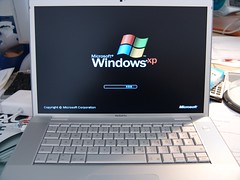 Back in January, you may remember that Howard bought himself one of the first Intel Macs, you may also remember how he was a definite early adopter with Windows on the Mac, but then hit a number of problems with the limited driver support offered by Boot Camp. Anyway, chatting with Howard today he was talking about his new Dell laptop. Essentially, Apple has not updated the drivers that Boot Camp uses since the original release, so all the same problems remain.

That set me thinking, is it really a pipe-dream that Apple will ever provide drivers that will get the best out of Windows running on a Mac?

Thinking about it, it doesn’t really seem to be in Apples interest to get Windows to perform well on their machines. Since many of their revenue streams are tied up with MacOS X and it’s applications, if users buy their hardware and then just install Windows, Apple won’t make any more money from them. Certainly it seems to make more sense that there will remain key missing features and niggles with the Boot Camp drivers, and generally poorer performance that you’d expect, so that there remains a reason to boot up MacOS X on the machine.

Essentially, several months down the line, the Boot Camp episode was much more about publicity, and putting a stop to the third party hacker efforts to boot Windows, as providing users a fully working version of Windows on Mac hardware. Indeed, I wouldn’t be at all surprised if Boot Camp changes into something a lot closer to Parallels Workstation where Windows has to run within MacOS X, again giving a reason why MacOS X has to be booted up. Certainly, it doesn’t really make a massive amount of sense to waste too much time and resources on a project that reduces the long-term revenue they could earn.