This morning when I started the car, there was a warning light left illuminated on the dashboard. Needless to say the icon was a bit obtuse, at a guess I thought it might be something to do with the brake lights, as it looked a bit like a cross between a bulb and the hand brake light, but after a flick through the manual it turned out to be a general bulb problem warning. A quick bulb check and it looked to be one of the headlamp bulbs.

Now as any long term readers of this blog will know I had a generally poor opinion of our previous Ford Focus, especially when it came to changing headlamp bulbs, since the design of the engine bay in the revised mark one Focus we had was so bad that even the experts had to disassemble the front of the car to change one of the bulbs. I’m not alone in that either, the original posting is by far the most commented on the site. There are various suggestions on how to make it easier, but whichever way you look at it the bulb change is still a pain.

Compare this to the Volkswagen Golf we now have. I’ve just popped down to the car park and changed both headlamp bulbs in about ten minutes with no tools at all, the back of the headlight is a screw fit, and the bulb sits in a socket that again screws in and out. It’s not exactly as if there is loads of free space in the engine bay of the Golf – it’s still a bit fiddly, but it’s a job that either myself or Beth could easily completed on the roadside, rather than needing a toolbox or a visit to a garage to do the job properly.

It was all going so well. Although I’d spent about twenty minutes sat in the queues in Wokingham to get across the level crossing, I’d had no problems retrieving the money I’d contributed to the SSE Sharesave scheme over the years from the branch of Halifax in town. Whilst it wasn’t anything like the amount that would have come back in shares based on the current price, it was still a nice sum.

Going back down towards the office, there was what looked like two muddy tracks on the road coming out of a building site, but I didn’t pay much attention to it. I pulled into the car park, and then reversing into the space the steering felt a bit heavy. I got out to a really audible hissing noise, and the front wing of the car slowly sinking… 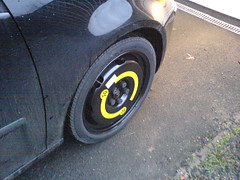 Anyway, it was tipping down with rain, and since I didn’t much fancy struggling with the weedy little tools in the wet, and after the quick work they made of it last time, I took the easy way out and made use of my rarely used AA membership, and got a patrolman – complete with big beefy jack – to change over to the space-saver spare.

Thankfully, the patrolman appeared in what turned out to be one of the few dry periods in the afternoon. As before, he had a full sized trolley jack, and made quick work of getting the tyre off, the only point of difficulty being the traditional struggle to shift the machine tightened wheel nuts. When the AA man got the tyre off, we had a look around it to see where the hole was – and at first site, it seemed absolutely fine. After a closer look the AA man spotted a small split in the tread, but no sign of the cause. I had a quick look around the car park, but there was nothing obvious, so whatever had caused the puncture must have dropped off pretty quickly. Annoyingly it wasn’t a puncture in the old tyres on the back either, but in one of the two new tyres I bought just before Christmas – I’d got just three months use out of it! Anyway, I put in a call to Ridgeway and ordered in a replacement. Slightly amusingly, after forgetting to note down the tyre details before phoning them last time, I made sure I had all the tyre details, however I needn’t have bothered as Ridgeway had kept a note of them from last time! Hopefully with the relatively new tyre on the passenger side at the front, there won’t be an issue with uneven tyre wear. My experience with the first set of front tyres on the Golf is that the drivers side seemed to have worn a bit quicker than the passenger side anyway, possibly something to do with having most of the weight on that side of the car most of the time I guess. The new tyre will be in by tomorrow lunchtime, so I’ve been allowed to leave work early tomorrow afternoon to get it fitted. I guess I should be more careful of what is in mud on the road in future too!

So yesterday, after having the car for over a year, I got my first experience of changing a headlamp bulb on my VW Golf. Now if this sounds like I’m getting a little overexcited about a simple bulb change, you might like to read back over the hassle I have with our Ford Focus, particularly the eye-watering Â£60 for the dealer to fit the passenger side bulb.

Anyway, I’m pleased to report that the change for the Golf was simple enough that I did it in the car park of Halfords, with no need for tools screwdrivers or anything. The back of the headlamp unit is a screw cover, then the bulb itself is in a socket mounted in a plastic holder that again screws off. The holder can only go back in the correct way up, and again it all just screws back together. This was a breeze compared to the metal clips and plastic flip up cover effort on the Focus. In fact it even takes the same type of bulb as the Focus which makes life easier.

Having said that, whilst I was there, I did a light check, and spotted that the wing mirror indicator on the passenger side was not as bright as on the drivers side, indeed it seemed that some of the LED’s where flickering off on some occasions. Looking through the manual there was nothing about these bulbs, and nothing about how to change them, so today I gave the VW dealer a call. The diagnosis over the phone was that from the symptoms it could be a ‘fault with the board’, in which case it’s a warranty repair. Otherwise, if it’s that the bulb is going, then it’s Â£18+VAT to replace it – somewhat less painful than the headlight replacement over at Ford it has to be said. They were able to take the car in on Saturday to sort it out too.