This morning when I started the car, there was a warning light left illuminated on the dashboard. Needless to say the icon was a bit obtuse, at a guess I thought it might be something to do with the brake lights, as it looked a bit like a cross between a bulb and the hand brake light, but after a flick through the manual it turned out to be a general bulb problem warning. A quick bulb check and it looked to be one of the headlamp bulbs.

Now as any long term readers of this blog will know I had a generally poor opinion of our previous Ford Focus, especially when it came to changing headlamp bulbs, since the design of the engine bay in the revised mark one Focus we had was so bad that even the experts had to disassemble the front of the car to change one of the bulbs. I’m not alone in that either, the original posting is by far the most commented on the site. There are various suggestions on how to make it easier, but whichever way you look at it the bulb change is still a pain.

Compare this to the Volkswagen Golf we now have. I’ve just popped down to the car park and changed both headlamp bulbs in about ten minutes with no tools at all, the back of the headlight is a screw fit, and the bulb sits in a socket that again screws in and out. It’s not exactly as if there is loads of free space in the engine bay of the Golf – it’s still a bit fiddly, but it’s a job that either myself or Beth could easily completed on the roadside, rather than needing a toolbox or a visit to a garage to do the job properly.

When the reminder that our Focus needed servicing a couple of weeks ago, we found out that our local Ford dealership which was Reg Vardy had now become Evans Halshaw following their merger with Pendragon PLC. It doesn’t seem to have made that much of a difference.

The car was in for it’s MOT and service. Last year listed on the warnings list was worn brake pads, which Beth highlighted when she dropped the car off. This time around there was no mention of the brake pads, nor were they changed. Were they wrong the last time or this?

Just to further build confidence, they also highlighted that there was a problem with the headlamp alignment on the nearside. This is the headlamp that is impossible to change, so the only people who have touched the lamp are the technicians at Reg Vardy/Evans Halshaw who are supposed to realign the lights after the change – the whole reason a dealer has to do the bulb change in the first place. Another issue they highlighted was that the air conditioning had never been recharged – it has, a couple of years ago – and it was Reg Vardy/Evans Halshaw that did it – apparently that error is down to the new computer system.

As a result of the headlamp issue I’d already decided to not get another Ford, however after this effort, particularly them trying to charge me to put right something they didn’t get right in the first place, I’m certainly considering whether another garage would be in order.

So having paid Â£32 for Reg Vardy to change the headlamp bulb on the Focus on Saturday, I checked out the lights when I put the car away tonight. However the pattern of the lights looked wrong. Taking a look at the light, although the main bulb was replaced and working, now the side light bulb that sits underneath had failed.

Whether it has blown, not been reconnected correctly or what, I’m not overly keen on going back to have it changed again, and possibly having to argue over paying another Â£32 to have Reg Vardy take it to pieces again. The simple fact is that nobody should have to pay that amount of money to have a bulb changed in the first place. 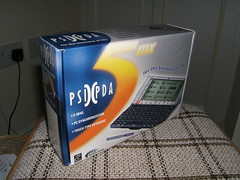 This weekend we’ve had a couple of repairs.

Firstly there was the Focus Bulb change, which started off somewhat stressful when we arrived at the dealer to be told that they were only planning to asses the work that was needed, not actually do it. At this point I said that I had told them over the phone exactly what needed doing, at which point they said that they didn’t order parts in ahead of time – remember that all that needed doing was the replacement of a bulb which they could get at the Halfords round the corner. At this point, the service manager clarified exactly what the problem was, and it seems that the person who had taken the booking had written down that I wanted the whole headlight unit changed, rather than just the bulb. Perhaps the only saving grace this time round was that they did it slightly cheaper due to less time – I assume because the dealer is getting well practised at changing Ford Focus bulbs. Having said that it is still massively more expensive than the cost for doing the same job on my VW Golf – a task I can do myself in minutes.

Secondly, I also got my venerable Psion 5mx back after a visit to POS Ltd for a service and to sort out a problem with the sliding keyboard mechanism not shutting smoothly. The keyboard is held in place by a metal spring, this is held in place by a couple of small plastic lugs, and it seems one of these had broken, so POS took the old case off and replaced it with a new one. The new case is the same colour, aside from around the external voice recorder buttons, where the surround is now silver rather than black. The finish also feels slightly different, compared to the older plastic that remains around the screen. However the interesting thing, was the packaging in which it was returned – a box for a PsiXPDA, a machine that has a website, and is described on the POS site, but that doesn’t seem to be available. Looking at the spec on the box, the machine is essentially a classic Psion 5mx but with the manufacturer logo changed. I’m thinking that perhaps I’ll keep the box, as quite apart for being just the right size to pack a Psion 5, maybe if the PsiXPDA never sees the light of day it will be a bit of a collectors piece.