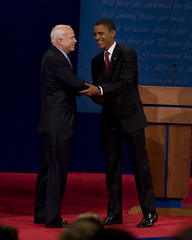 Last night was the first of the US Presidential debates, which after initial suggestions by John McCain that it should be postponed, went ahead with the participation of both major candidates.

Since of course it took place in the middle of the night UK time, various of the UK channels have been rerunning either the whole debate, or highlights. You can watch the full debate on the BBC News site. Of course in the UK we don’t have a say, but thanks to the close relationship our governments have recently had with each other, it does have an effect on those of us in the UK.

I’ll leave any discussion of the finer points of policy, but what was interesting was comparing it to what happens over here. Certainly we’ve never had face to face debates like this, what we most commonly have is a series of programmes where each of the individual leaders of the political parties face an audience of voters. Perhaps the main example of a programme where we have opposing parties together is something like Question Time. The interesting difference between both formats and this presidential debate is the silence from the audience. In the UK there is usually an instant response from the audience to statements by the politicians, and on a number of occasions politicians have been heckled by members of the audience. The other difference was, I guess in part due to the rigid time-boxing applied to the debate, there wasn’t that much confrontation. There were a number of points where it was pretty obvious that Obama thought he was being misrepresented, tried to cut in, McCain kept ploughing on with his point, and Obama just capitulated and indicated to the chairman that he didn’t wish to respond.

Commentators seem split over who came out best. Both campaigns are not surprisingly claiming victory for their candidate, but it wasn’t really clear to me who won. In terms of policies I’m always going to be much more towards Obama, but then in a world driven by soundbites, things like McCains KGB line over Russia, however corny it may seem, probably go over a lot better than trying to explain the massive complexity of the political situation in the former Soviet Union. You can make your own mind up by watching the full debate.