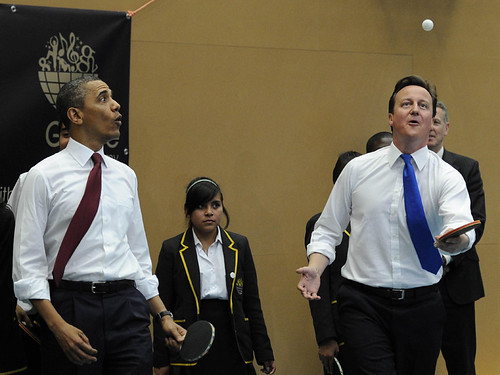 This is probably my favourite shot so far, not for Obama and Cameron having a great time reliving battles across the ping pong table from the sixth form common room, but because of the distinctly unimpressed voter of the future behind.

Maybe she’s just not impressed by a couple of politicians playing table tennis, or maybe she was the one who had the table tennis table booked for this particular slot and has been bumped for the photo opportunity! 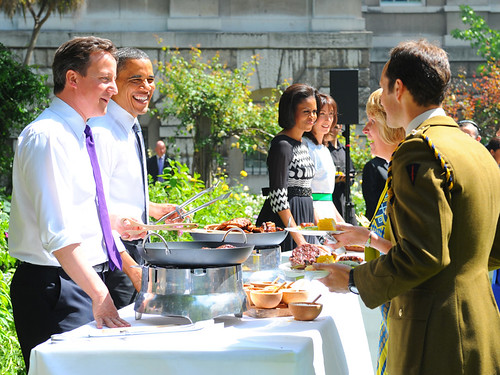 With the White House, Number 10 and Royal Family Flickr feeds all publishing pictures from the Obama State Visit there are loads of great shots coming out. This one is from the barbecue in the grounds of Number 10.

Maybe I’m doing them an injustice and Obama and Cameron tended the coals all afternoon cooking the burgers, but somehow I doubt it…

Hat tip to the Flickr Blog for highlighting the White House Photostream, which does seem to show a pretty candid behind the scenes view of the Obama White House.

Iâ€™m quite sure all the pictures have been suitably cleared, but it does seem that the photostream gives you a lot of behind the scenes views, so you get to see Obama picking his Oval Office chair, the new family dog being shown around, Obama watching his daughter play basketball, Obama and Biden practising putting, and even Obama watching the Super Bowl along with some of the more classic working in the Oval office type shots.

You also get to take a look at some of the iconic locations that are so well known, like the situation room, scenes on Air Force One reminiscent of the West Wing, the Roosevelt Room and the Cabinet Room.

There are numerous great shots â€“ currently getting on for three hundred, just from the first one hundred days in office. Rather than list any more, Iâ€™ll just let them speak for themselves with the slideshow.

Seems I’m not alone in being disturbed by the palling around with terrorists/Muslim associations.

This is the full video of General Colin Powell, member of the Republican party, former Chairman of the Joint Chiefs of Staff and Secretary of State in the first George W Bush administration, endorsing Barack Obama for the next President.

Powell is considered a moderate Republican, has donated to the McCain campaign, and indeed was touted as a possible running mate for McCain, and he doesn’t just endorse Barack Obama. In a measured and thoughtful statement he questions McCain’s judgement in both his selection of Sarah Palin, and over the recent financial crisis, and then addresses the whole terrorist/Muslim issue head on. It is pretty clear that he thinks that the McCain campaign is quite deliberately associating Obama with a terrorist and letting people believe that he is Muslim, so he unequivocally says that Obama is Christian and always has been. But then he goes further, and questions the assertion that a Muslim can’t be President, highlighting a particular example of a Muslim American who has died serving his country in Iraq. Certainly it is a statement well worth listening to, the question is now how will the McCain campaign respond. Will they turn on Colin Powell? We’ll have to wait and see – but I doubt stuff like this will be uncommon.

I had to share this video that is doing the rounds which is from a report on the English language version of Al Jazeera who went out to a Sarah Palin campaign rally in the conservative heartland of the mid-West.

There has been quite a bit of discussion over the fact that McCain seems unwilling to publicly use Jeremiah Wright in the campaign. Call me sceptical, but my thought is that it pays the McCain campaign to not highlight an association between Obama and a Christian pastor if potential voters think he is a Muslim. This video also shows the effect of keeping on repeating the palling around with terrorists comment on parts of the electorate, despite the reality being rather different.

All in all though it is a disturbing picture of the opinions of some of the McCain supporters.