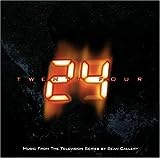 With the fast moving nature of the current situation in London we watched Newsnight, which opened by comparing the days events in London with “an American Cop show”.

I have to say that during the day, with news coming in of the shooting of a suspect on Stockwell station and houses raided on the Harrow Road and another in Stockwell, following on from the attempted bombings yesterday, and the chase through University College Hospital, I was starting to reflect on how much like a 24 plot this is becoming.

As with many, I think there is also an increasing amazement at the change. Listening to PM on the way home one listener e-mailed in to say that he was more concerned about having police that would shoot a restrained suspect than having bombers on the loose. This perhaps is now the source of most discussion, especially over whether the Police have changed their standard policies over warnings, and where to aim. There is also discussion over whether those people involved yesterday where special forces rather than Police at all.

Having said that, perhaps the biggest breakthrough is the fact that none of the bombs went off on Thursday which leaves a lot of evidence, plus live terrorists to catch. I suspect we are in for many more days of fast moving investigations before this is over, even without this mornings news of bombs in Egypt.

As to how it will affect us, Beth and myself had an interesting conversation yesterday. Whilst you’re more likely to get injured on the roads in London than hit by a bomb, whereas Beth was keen to go up to London for the day at some point during the holidays she has decided it would be better not to go. Basically with all the chaos and disruption at the moment it seems that avoiding going into London unless we have to is the best policy.

By coincidence the BBC are also starting a new series looking at how Al-Qaeda has been changed since September 11th starts on Monday on BBC2.

I’ve just finished watching the latest episode of Enterprise to air in the UK, and to be honest it was great. It didn’t get lost in technobable, nor did it suffer from plot holes the size of the Channel Tunnel. It was just a generally very entertaining hours entertainment.

I have to say that although I particularly enjoyed this episode, most of the rest of the series has been great too. Basically, once series four kicked off, Brannon Braga and Rick Berman handed control to new boy Manny Coto and the series is all the better for it. Berman and Braga only returned to write the reportedly lousy series finale that we get in the UK at the beginning of August.

To be honest, it seems that what the team decided to do in the final series was just go for fan pleasing episodes, the kind of stuff the fans were expecting from the beginning. So tonight we saw the green skinned Orion slave girls again, who appeared in the very first episode of Star Trek, and in the closing credits for many episodes, and other original series aliens were mentioned. The plot was simple, and one that had been done before, with the Orion girls being part of a plan to capture the Enterprise, with all but two of the crew affected, however it was very well executed and entertaining, even having an almost Spock like moment of dead-pan Vulcan humour towards the end.

All in all, had Enterprise been the show it has been during these final episodes from the beginning I’m sure it would have been much more of a success. Anyway, at least Manny Coto has found a new home on 24, and I for one can’t wait to see what effect he has there.

We’ve just finished watching the Sky One back-to-back showing of hours 23 and 24 of series four of 24.

The last two hours started with Tony held captive by Mandy, the profesional terrorist who has been in the background through all four series, right from the early episodes of series one currently reshowing on BBC, and including her assasination attempt on President Palmer at the end of series 2. Needless to say, it was slightly predictable Tony getting caught as in the previous episode he and Michelle had just got back together, however the writers were nice, and although at one point you thought Tony was dead, ultimately the two of them got together.

Jack was not so lucky. As with previous series, the main series plotline was tied up within a few minutes of the start of episode 24, when CTU managed to locate the missile and it was shot down. This left Jack to come back to base to be dumped by his girlfriend, and then to discover that the Chinese wanted him arrested for the slightly botched raid on their consulate earlier in the series. The current presidential security adviser decided that Jack was too much of a risk to fall into Chinese hands, and arranged for him to be arrested and then killed. However, Jack got a warning from ex-President Palmer, and with the help of Tony, Michelle and Chloe, made his escape, after faking his own death. Of course as Tony and Michelle dropped him off, they left him with a handy secure mobile phone, ready for series five next year.

To some extent, what was promised with series four, with it being a different show without the regular cast didn’t materialise, by the middle of the series, about the only regular who hadn’t appeared was Kim, and then by the end we even had ex-President Palmer coming along too, in many cases almost replacing new characters that had appeared at the beginning of the series. There have also been criticisms that much of series four was a rehash of series two, and also concerns about the focus on arab terrorists. Another area of concern was the more extensive use of torture, with some commentators speculating whether the show was attempting to legitimise torture in the War on Terror.

Series five may well have to be different, with Jack having to go on the run. However it seems apparent that the writers have decided that they need a group of familiar characters, hence why many of the regulars were brought back in during this run. One positive note is that, following the demise of Enterprise, 24 has gained the services of Manny Coto, widely credited with having produced some of the best episodes of Enterprise during it’s final year. Since 24 has already been given a sixth season, hopefully he’ll have a better run at this show than he got with Enterprise!