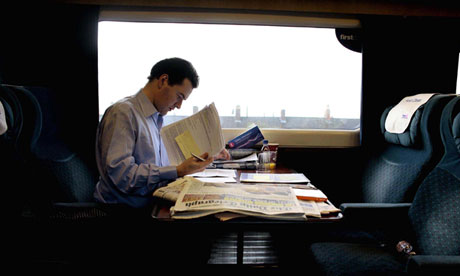 Today was the Autumn Statement, supposed to be just an update but once again a mini-budget this was Osborne and the coalition attempting to convince the country that he knows what he’s doing, despite the fact that he’s continuing with austerity, a policy that isn’t working now, in the same way as it has never worked before.

Sadly I fear we’re stuck with this policy which if we go the same way as previous austerity programmes will see us spiralling into further recession. Considering that the other news of the day was South West Trains inability to run a railway service after 2mm of snow the Guardian combined the two stories quite nicely…

Deficit reduction that was first going to take five years was later revised to a seven-year austerity programme. That became eight on Wednesday when George Osborne admitted that a flatlining economy meant his fiscal timetable was now as reliable as Thameslink’s on a bad day. The chancellor insisted that Britain was on the right track. What he didn’t tell us was that it’s a slow moving train, with expensive tickets and uncomfortable conditions for those travelling third class.

With my Churchwarden hat on there was a good little bit of news from the Budget today – the news that although the basic rate of income tax will be cut from 22% to 20% on April 6th (which was announced last year), they are now not going to cut the rate at which Gift Aid will be paid out – at least not for the next three years. Financially, the drop in Gift Aid income would have made a small but significant impact on our income as a Church. Just a pity that the government only got round to doing anything about the problem less than a month before the change was due to take place, once Churches and charities have spent time putting together campaigns to highlight the issue to givers – it would have saved people a whole pile of work if this had been announced months ago… Better late than never though.