So with the weather forecasters predicting an ‘arctic blast’ coming our way in time for the weekend, and ‘sub-zero temperatures’, I thought I’d just post this picture of the weather that our cousins across the pond in Alberta are experiencing.

Note, that the title of this picture, taken in Edmonton yesterday is “It’s Warmer Today” – the temperature on the display is -26. Calgary has been getting a similar selection of temperatures too.

One of the things you learn pretty quickly looking at the statistics for your blog is that the most surprising posts are popular, and that for no apparent reason, posts suddenly get a burst of popularity.

That kind of thing periodically happens with the BBC News site, that lists the most read and most e-mailed articles at the current moment. Currently, the most e-mailed article is this one reporting on an Economist Intelligence Unit report that lists Vancouver as the best city in the world to live in, and also putting Toronto and Calgary in the top ten.

The problem? The article was written over two years ago, at the beginning of October 2005. Patriotic Canadians perhaps?

First off, a bit of good news to all of our friends who have got one of my moans over about the past week about the complications of trying to book our next trip to Canada – you’ll be pleased to hear that we’ve now actually booked a trip, so no more moans – well at least not about this! 😀

The problem has been trying to find a reasonably priced flight that fitted in with when we wanted to go. Now there are two competing airlines flying the London to Calgary route I foolishly assumed that it might make the fares more competitive – no such luck, Air Canada were doing their usual mickey take on prices, and the new competition, British Airways were coming back with fares of over Â£2000 return for both of us to go over on the dates we wanted. I then moved onto Canadian Affair, who are usually pretty good, but they are still running their winter schedule when we were looking, and the only options they had were some seats on a Monarch flight, which whilst it is cheap is a 29â€œ seat pitch which whilst it is fine for Beth would be torture for me, or a couple of their once a week Air Transat flights that would have significantly cut the length of the trip.

Anyway, the breakthrough came when I tried looking up flights into Edmonton rather than Calgary. In the past it’s not really ever been an option – certainly the only times I’ve flown into Edmonton it has involved a plane change at Calgary, and a trip on the little turbo-prop service that shuttles backwards and forwards between the two cities. However now, alongside the twice daily service to Calgary, Air Canada have added a daily service into Edmonton – and significantly at a rather cheaper cost than the equivalent trip into Calgary.

At this point the vagaries of how airlines actually work out their flight costs really starts to get confusing. Looking at the seating plans for the Edmonton flights, they don’t look any less full than those into Calgary – the journey to Edmonton is marginally shorter granted, but in the grand scheme of things not by much, but the cost of the tickets we were being offered was noticeably less than what was being offered into Calgary. Actually if you really want to confuse yourself, try coming up with a reason why it’s cheaper to fly to Toronto and then on to Calgary than take the direct flight – longer flying time, more fuel used, but still cheaper.

Having got some idea of the costs I then tried to put together the best deal – and discovered that since their take-over by Air Transat, Canadian Affair are really not keen on booking flights with Air Canada – and that was after we’d been through the usual routine over my insisting that we needed to book the car rental with Hertz. (For the reasons why, check out this post about car rental companies and their definitions of â€?off-road drivingâ€œ.) Thankfully I’ve now discovered that Opodo, unlike Expedia and Travelocity do have a deal with Hertz so I can build a reasonable package with them without too much trouble.

The one final oddity when we were booking on Opodo was down to the BMI codeshare on the flight – as usual the same physical flight was listed twice at different prices – however even more odd, the BMI version of the flight had only four seats left, whilst the Air Canada version had availability marked as â€?goodâ€œ – indeed if you look at the flight using the Air Canada reservation system online the flight is only about half full. I’m guessing that there are only a limited number of codeshare seats available – although as it’s all going through the same booking system I can’t imagine it’s too difficult to allow any of the seats on the plane to be sold through any of the codeshare partners.

Anyway all of that aside, after a bit of comparing, we’ve eventually opted to fly in and out of Edmonton on Air Canada for this trip. Even including the cost of the car rental and a hotel for the first night we are there it still worked out cheaper than flying into Calgary!

So no sooner are we back from Canada, than we’re both back to work. As a result I’ve taken the opportunity to upload various pictures from our trip. 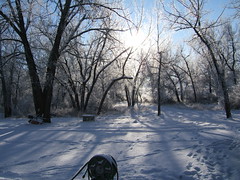 This being the middle of winter, there aren’t that many pictures, since aside from a day in Medicine Hat we spent the majority of the time on Beth’s parents ranch. Luckily the snow didn’t hit until the day after we arrived, and with no further major snow we had no problems getting back to Calgary to catch our plane. Having said that, when we set off for the airport on New Years Day morning, the temperature was a very chilly -23Â°C – which thanks to the brewing Chinook Wind had hit 5Â°C by the time we reached the city, and is expected to climb higher in coming days. Of course the winds also gave us a pretty bumpy ride as the plane climbed out of Calgary too.

All the pictures are loaded in to the recent pictures feed – with the majority of the pictures, a series of pictures of the ranch in winter, being stored in a special photo set. Depending on how things go, I may well blog about some of the rest of the trip over the next couple of days, particularly whether our decision to try the new British Airways service will change our travelling preferences for future trips.

Many of you will probably have heard me grumble about the prices of direct flights from London to Calgary. Thanks in part to the take over of Canadian by Air Canada, the only major carrier operating a direct service has been Air Canada. The impression I’ve got over recent years is that they’ve tended to take advantage of that to make some money on the tickets – the cheapest direct tickets sometimes costing twice as much as some of the indirect competition. However, all of that is going to change come December, as after an absence of eight years, British Airways are starting up direct flights again, which hopefully should bring about some competition on the route and bring the fares down a bit.