Can’t quite fathom out why, but Flock keeps wanting to show me this picture of a building site in Rickmansworth… 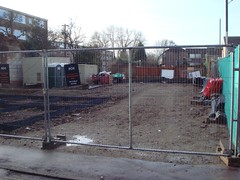 When the reminder that our Focus needed servicing a couple of weeks ago, we found out that our local Ford dealership which was Reg Vardy had now become Evans Halshaw following their merger with Pendragon PLC. It doesn’t seem to have made that much of a difference.

The car was in for it’s MOT and service. Last year listed on the warnings list was worn brake pads, which Beth highlighted when she dropped the car off. This time around there was no mention of the brake pads, nor were they changed. Were they wrong the last time or this?

Just to further build confidence, they also highlighted that there was a problem with the headlamp alignment on the nearside. This is the headlamp that is impossible to change, so the only people who have touched the lamp are the technicians at Reg Vardy/Evans Halshaw who are supposed to realign the lights after the change – the whole reason a dealer has to do the bulb change in the first place. Another issue they highlighted was that the air conditioning had never been recharged – it has, a couple of years ago – and it was Reg Vardy/Evans Halshaw that did it – apparently that error is down to the new computer system.

As a result of the headlamp issue I’d already decided to not get another Ford, however after this effort, particularly them trying to charge me to put right something they didn’t get right in the first place, I’m certainly considering whether another garage would be in order. 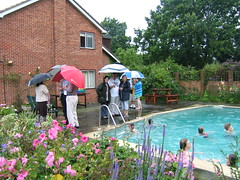 In recent years, we’ve not had much opportunity to demonstrate our traditional British stoicism in the face of the British weather – not so this year. After major flooding yesterday, and with more rain predicted, today was planned to be the annual swimming party and barbecue for the junior choir. There was some speculation that maybe we’d cancel – as you can see from the picture we didn’t!

Here you can see the junior choir happily swimming whilst it pours with rain – and with the parents huddled under umbrellas!

Having said that it was still rather galling when after an afternoon of downpours, just as everybody was leaving the sun finally came out – well for a few minutes anyway.

Opening the garage door this morning, I heard something fall, and hit the car and then the concrete floor… Looking around I found this bit of brick in two bits on the ground, and some dust of the same colour on the edge of the car.

Luckily the brick just glanced off the rubber window seal on the car, and didn’t do any damage, and thankfully it also missed me. I’ve had a look at the garage wall around where it fell, and can’t see where it could have come from, there are no obvious holes or anything missing, so it is all a bit of a mystery as to where it came from. Currently our best suggestion is that it was a brick fragment that for some reason was left in the rafters, and it’s taken three years or so to work to a point where gravity took over and brought it down, however in future I shall be rather careful of falling bricks when I get the car out of the garage!